Vision and skill bring Kirawan, a 53′ Philip Rhodes cutter, back to her former glory.

Feature article by Andrea McHugh in the 2020 Newport Harbor Guide

Dan Levangie had been on the hunt for years. He didn’t expect to find his prey wasting away in a boatshed in a tiny coastal village on the west side of Narragansett Bay.

Levangie, an experienced yachtsman, was familiar with some of the well-documented restorations completed by Loughborough Marine Interests (LMI) in Portsmouth, Rhode Island, most notably a handful of Sparkman & Stephens stunners including Sonny, a 53-foot sloop built in 1935; Skylark, a 53′ yawl designed in 1937; and arguably Olin Stephens’ best known design, Dorade, a 1930 yawl that took top honors in so many revered ocean races that  The New York Times called her “the forebear of modern racing yachts.” But it was the highly touted rebuild and restoration of Santana, a 55’ schooner launched in 1935 and best known as the beloved classic yacht once owned by Humphrey Bogart that stirred Levangie’s quest for a classic. Santana caught Levangie’s eye in 2016, when it was docked at Newport Shipyard just a few slips from Windwalker II, his 60′ Ted Hood-designed centerboard sloop built for luxury and speed.

The fatigued boat in the sorry shed wasn’t the first classic Levangie pursued. “Dan had myself and another shipwright take a look at Chubasco, another Sparkman & Stephens,” says Joe Loughborough, who founded LMI in 2002. “He was on the cusp of pulling the trigger … funny enough, last minute he got cold feet. He said, ‘No Joe, I’m not going with this one but standby, because I’m continuing to look.’”

Less concerned about enviable pedigree and more focused on superior boat design, Levangie got word that a Philip Rhodes-designed 53-footer, Kirawan, was wasting away in a weather-beaten boatshed in Wickford, just a short sail from Newport. Forlorn and forgotten, she had slumbered there untouched for nearly 15 years. “She was a mess at the time … the only thing living on her when we found her was raccoons,” laughs Levangie. “But I fell in love with her lines.” He called on Loughborough and his top shipwrights, along with his captain Craig Bliss, to take a look. “We all had a reasonable feeling she could work out nicely,” tells Loughborough. It was an understatement.

Kirawan put naval architect and legendary designer Rhodes on the map. Just a month after her launch, Rhodes was aboard the boat as she braved fierce seas in the 1936 Bermuda Race before claiming victory off St. David’s Lighthouse. Gaining international fame with the win, Rhodes, born in 1895, would go on to enjoy a career that spanned five decades.

He was known for designing myriad vessel styles including only one 12 Meter, Weatherly – winner of the America’s Cup in 1962. Seen sailing off Newport daily during the warmer months, she remains one of only three surviving wooden America’s Cup defenders in the world. Rhodes’ design acumen is celebrated from his world class yachts commissioned by America’s wealthy industrialists, including the Rockefellers, to the simplest dinghies (even hydrofoils dot his resume).

Despite her sorry condition when he came upon her, Levangie was convinced that under Loughborough’s tutelage, Kirawan could be nursed back to her former glory. “We all knew about [the boat] locally, but it had been rather forgotten,” says Loughborough. He was familiar with her history; that Kirawan had made her way to California, even enjoying some fame when owned by Terry Moore, an Oscar-nominated actress during Hollywood’s Golden Age (but better known as a former wife of business and film tycoon Howard Hughes). Later, Kirawan was purchased by Tony Dow, the actor who played Wally on Leave It To Beaver. Film producer Sandy Horowitz rescued her in 1993 and invested in the refit she desperately needed by that time. “New interior, new engine, new deck and it was trucked to Rhode Island in 1999 or 2000,” to be readied for the 2000 Bermuda Race, explains Loughborough. “They were doing fine [in the race] but she started leaking … in California, they hadn’t attended to the real problems of the boat. They rather glossed over some serious issues she had. The leaks were so bad down below with water squirting through the planking that they were hanging a man over the side in the bosun’s chair trying to do repairs as they were racing.” Kirawan would finish last in her division.

There was one final large-scale restoration effort after the 2000 race disaster but ultimately, funding dried up, causing Kirawan’s shabby condition when Levangie found her in 2017. “All the bits and pieces landed at LMI,” says Loughborough, including the ballast keel, which had been sawed off and trucked over from Wickford with the boat, and the mast, which turned out to be unsalvageable. And so began a 22-month, multi-phase restoration and refit, with a single photograph Levangie provided for inspiration. “He said, ‘I want my boat to look like that.’”

Loughborough credits the same old band of shipwrights who resurrected Santana (which would win Classic Boat magazine’s coveted Restoration of the Year award, along with a cover story) for Kirawan’s meticulous work. East Passage Boatwrights in nearby Bristol crafted a hollowbox construction 72.5’ spruce mast with all internal halyards along with some butterfly hatches on the deck. Teak Ackman and his team at Seven Star Marine did the machining, Custom Navigation Systems in Portsmouth did the electronics, and RC Marine Electric in Newport did the electrical work – and that’s just part of Kirawan’s village. Another yeoman’s task was the deck. “Dan was very decisive about the deck, which was a little worn but not badly, but he didn’t like the bones,” explains Loughborough. So they started anew, with fresh wood and when salvageable, repaired deck beams.

“As the work started, I got more and more excited about it,” tells Levangie, who was a regular visitor at LMI, “and it became more and more exciting as it came together.” Below was a story all its own. “[He] walked down below, saw the interior and said ‘This has got to go.’ It was an incorrect period for the boat,” explains Loughborough, referencing the refit from three decades ago. Using original drawings, the interior was gutted and a new one, fashioned from rich mahogany and painted pine, now reflects its 1936 distinction.

When it came to the hull color, Levangie detoured from an identical restoration and eschewed the traditional for a deep navy blue. “Every one of these classics you look at, they have the standard white hull and they’re beautiful, but we had a conversation … it was kind of a group decision with me, Joe and my captain,” says Levangie. “She really stands out.”

As Kirawan returns to her rightful place, sailing among other revered classics in local waters, Loughborough has an appreciation for Levangie’s vision and the shipwrights who executed it beautifully. “He wanted it all done at a top level, and he had a great sense of humor and great sense of adaptability to pull it off,” says Loughborough. “There wasn’t a stone unturned that we didn’t attend to. … In the end, I believe, the boat is stronger than she was on her original build.” After nearly a century, a bright future awaits an American classic. 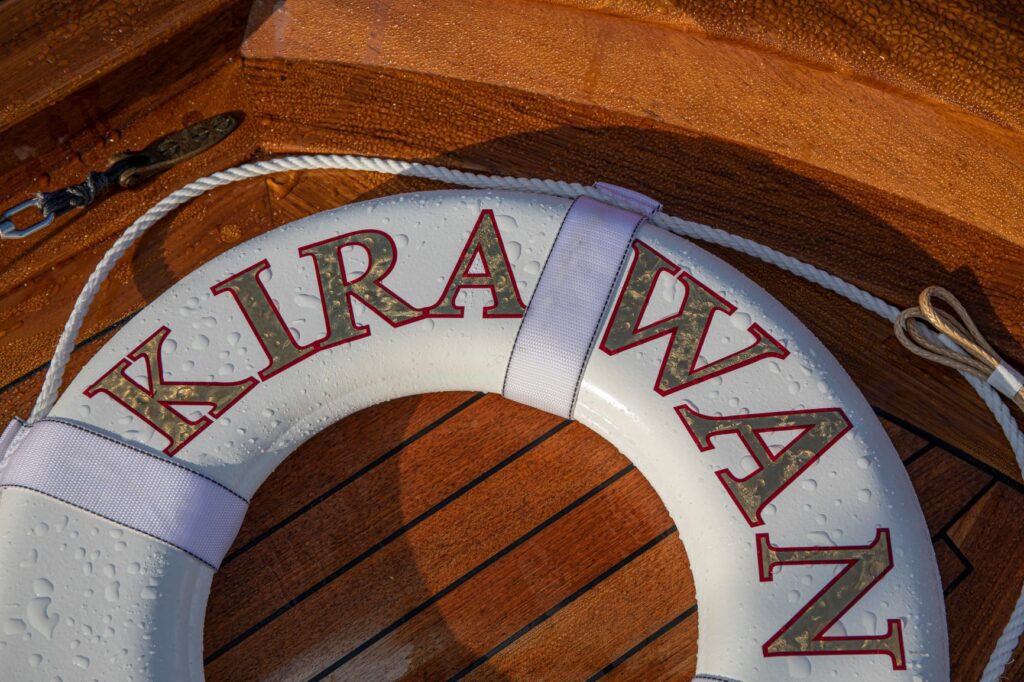