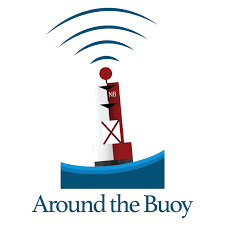 Popular podcast Around the Buoy is digitally connecting those with a love of life on the water.

Article by Andrea McHugh in the 2020 Newport Harbor Guide

In 2017, Carter Richardson, owner of East Passage Boatwrights in Bristol, Rhode Island was a guest on “That Newport Show,” a podcast celebrating the spoils of the City by the Sea. Turns out, the boatbuilder was an apt storyteller, waxing poetic about impressive restorations (including the restoration of Humphrey Bogart’s Santana, which brought together a band of shipwrights, along with the talent at East Passage, who helped win Classic Boat magazine’s coveted Restoration of the Year award for the boat), and his experiences sailing in Newport Harbor aboard Betty, his wooden Herreshoff 12½ built in 1930. The conversation flowed freely with host Helena Harris of Sparkle and Boom, a Rhode Island communications company that produces myriad podcasts. Inspired by their interaction, Harris pitched Richardson an idea: A dedicated podcast encompassing not only sailing but all aspects of life on the water.

The aptly named “Around the Buoy” podcast was launched and soon after, downloaded and streamed worldwide. “I wanted to start something like that for the boating community but just did not know how to get it off the ground,” Richardson says. Inspired by a popular podcast on running hosted by his cousin who owns a successful running shoe store in Washington, D.C., Richardson and Harris soon fell in sync. “I was a little nervous the first time out, but after a few episodes, it started to get very comfortable,” he says, conceding that if he went back and listened to the first few episodes of Around the Buoy today, he’d cringe.

The two began recording regular monthly episodes, interviewing interesting salts from Terry Nathan, former president of the IYRS School of Technology and Trades (Richardson is an alum) and Andy Green, a professional sailor and America’s Cup commentator; to Captain Dave Jackson, USN (Ret.), who works with the U.S. Naval Academy’s sailing team. A year later, Richardson interviewed Tyler Fields – a sailor, waterman and nautical photographer. The host and his guest had instant on-air chemistry and with Harris’s blessing, Fields replaced her, solidifying the final puzzle piece of Around the Buoy. Fields says one of the things he likes most about the podcast is that it doesn’t speak simply to sailors. “It’s for just about everybody who is interested in life on, in and around the water. From local Rhode Island oyster farms and historic yacht restorations to global ocean races and sailors running from hungry bears, we cover a lot of ground – and water,” he laughs. “Each of these stories is filled with incredible people doing amazing things.”

Though being in the marine trades and sailing competitively when time allows, Richardson says the podcast has opened a whole new world for the duo. “For example, I grew up watching Gary Jobson on ESPN broadcasting the America’s Cup in ‘87, the 90s and into 2000. He is the best and I could not think of a reason why I would ever get the chance to sit down with him to talk, but when they announced the National Sailing Hall of Fame was moving to Newport, I emailed him to see if he wanted to be on the show,” tells Richardson. “He quickly got back to us – and he was in.”

Every guest on Around the Buoy brings interesting insight, and some are well-known, like Jobson and Tracy Edwards, who was the captain of Maiden, the first all-female team to race around the world in the 89-90 Whitbread Race. Other guests are just intriguing, like Leo Goolden in the Pacific Northwest, who is reconstructing Tally Ho, a 1910 Albert Strange yacht and documenting it all on YouTube. “He has hundreds of thousands followers around the world,” says Richardson. “He shared the [podcast] link and that episode is by far our most downloaded.” And others who should be better known, like Natasha Lambert, a nuanced sailor who by her early 20s, had already sailed across the English Channel and most of the British Isles – not letting her quadriplegic cerebral palsy slow her down. The pair interviewed Lambert’s mother, Amanda, who talked about her daughter’s indelible can-do spirit.

A polished podcast by any measure, producing Around the Buoy is simpler than one might expect. “We record at the East Passage Boatwrights shop in Bristol, [but] ‘how’ is an entirely different question – a couple of microphones, a laptop, some excellent guests and one snoring dog,” says Fields. The harder work, they say, is the logistics of booking  guests, finding time to record around their full-time jobs and family commitments, and lastly, editing. But they’ve found a way, and have done so amid planning Around the Buoy events to bring listeners, fans and the community together by sponsoring movie nights at Newport’s Jane Pickens Theater highlighting sailing-focused feature films including Wind, Captain Ron and Morning Light. “The future of Around the Buoy is looking bright,” says Fields. “We are both very excited about our upcoming guests and can’t wait to share it!”

You can download episodes or subscribe to Around the Buoy on iTunes, Google Play, Stitcher Radio and Spotify, or wherever you listen to your podcasts.