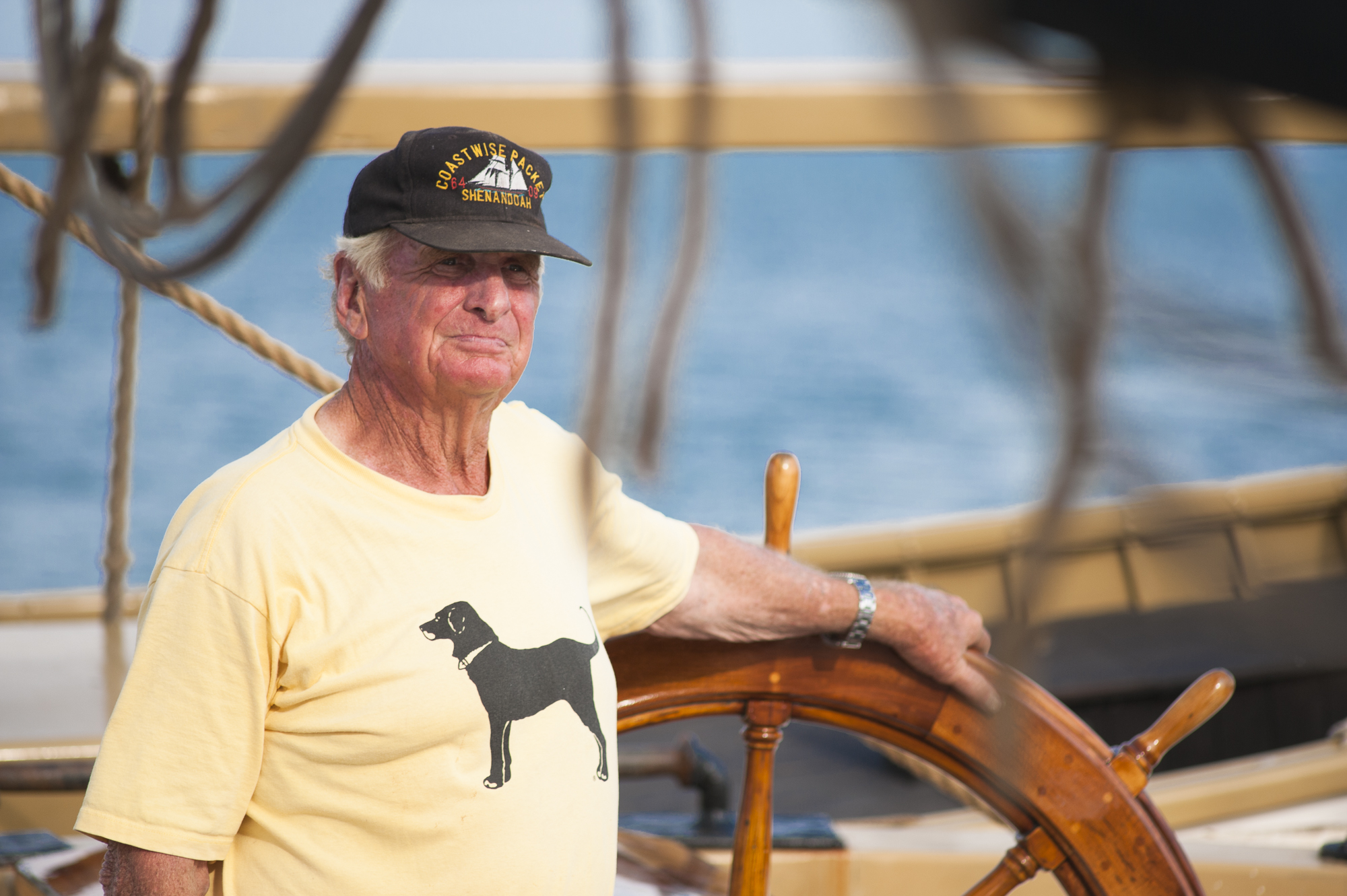 Capt. Robert Douglas looks every bit like what one might call on “old salt.” On the day of our interview on his beloved Martha’s Vineyard in Massachusetts, he arrives wearing a beige field coat over a gray flannel shirt, with a brown vest and tan khakis. Before the interview begins, he asks if he might run a quick errand to the grocery store to pick up carrots for his horses and for his wife’s chicken stew.

In his truck, we drive slowly across the island to West Tisbury, and after a brief stop at the market, we proceed to the unpretntious house built in 1838 that he has called home since 1978. Two excited Jack Russell terriers, Pip and Pogo, greet him at the door, and before long, the aroma of comfort food wafts in from the kitchen, where his wife of nearly 50 years, Charlene, stirs the stew.

One would never guess that Douglas founded what is now a multimillion-dollar business in 1971, the Black Dog, that now has 29 retail stores across the country, along with the restaurant that started it all—the waterfront Black Dog Tavern in Vineyard Haven. One can hardly walk 100 yards on the island without encountering someone wearing a Black Dog sweatshirt, sweater, shirt, coat or cap. “Like they used to say about the British Empire, the sun never sets on the Black Dog,” Douglas says. And then he laughs and says how fortunate he has been.

The name for the business came from his pet dog, a black lab/boxer mix. The dog’s name was … wait for it … Black Dog, after the character in Robert Louis Stevenson’s “Treasure Island.” And that’s how it all began. “It’s one of those crazy things,” he says.

But success hasn’t changed him. Douglas, 87, remains decidedly old school. He has a cellphone but rarely answers it, an email account he hardly ever looks at, owns a handful of trucks but no luxury vehicles, and lives on a sprawling stretch of land but in a modest home that suits his pragmatic sensibility. And one look at his wrinkled, weathered face provides more than a hint into his true passion. For 55 years, he has captained Shenandoah, the 154-foot square topsail schooner that he designed and launched in 1964. It’s an extraordinary run of longevity, both for Douglas and the schooner.

“I don’t think it’s ever happened before that one captain was associated with one boat for that length of time,” he says. “For most vessels, 20 years is a good run. I’m the luckiest person ever. I’ve done exactly what I wanted to do.”

Shenandoah is a Native American name that means “daughter of the stars,” and every summer, from June to September, Douglas is at her helm. When fall descends, the boat is stripped down, painted and prepared for winter. The process takes about a month. Spring fit-out starts up in April and even today, Douglas says, “I’m involved as much as ever.”

His journey toward the water began in 1947 when his family rented a summer house on the Vineyard to escape the Chicago heat, where he was raised. Somewhat incredibly, there was no sailing influence in his family. “Nobody had any tie to sailing,” he said. “My father didn’t do much boating and my brothers didn’t care about it.”

But his father rented a sailboat that summer, and Douglas, then 15, was smitten. After serving in the Air Force, where he was stationed at Hanscom Air Force Base in Bedford, Massachusetts, he moved to the Vineyard in 1958. He says being stationed at Hanscom changed the direction of his life. “It introduced me to New England,” he says. “I had never spent any time here, except for three months in the summer. I got to know it.”

Douglas owned boats over the next few years, but it wasn’t until he sailed as a deck hand with Havilah (pronounced “HAVE-a-lah”) Hawkins in 1960 aboard the wind-powered schooner Stephen Taber that he began thinking about taking a leap of faith. Hawkins was building a schooner to be called Mary Day at the Harvey Gamage shipyard in South Bristol, Maine. Douglas worked for Hawkins during this time and got a feel for what building and running a windjammer would be like, and the idea of Shenandoah began to take shape.

But it’s one thing to think about designing and building a boat and another to do it. That decision didn’t come without some angst. For three days, Douglas debated dropping the contract in the mail that would commit him to borrowing $170,000 to build the replica 19th-century schooner. When he finally put a stamp on the envelope and sent it on its way, he knew his life would never be the same.

“I realized I had put myself in handcuffs and started a rather long chain of events,” he says.

Building the boat took 15 months, during which time Douglas moved to South Bristol to monitor the process every step of the way.

“A day never went by when I wasn’t in the shipyard,” he says.

Shenandoah was launched on a bleak, windy day in February 1964. Carved from Maine oak, with native pine decking and fir masts, it was 108 feet on deck, had a 23-foot beam, a draft of 10½ feet, 7,000 feet of canvas spread in her nine sails, and carried nine crew and 32 passengers. At the time, it was the largest wooden sailing vessel with no engine built on the Atlantic Coast since 1921.

That’s right, Shenandoah doesn’t have an engine. “I like a boat that’s simple,” Douglas says. “If you keep it simple, you can stay involved with it. With most of the boats now, you need an engineer nearby.”

The lack of power meant passengers were put to work during the weeklong cruises. Working alongside the crew, passengers had to play an essential role throughout the journey. In the beginning, he chartered tours for tourists and locals, but for the past two decades he has hosted mostly is;and school children ages 9 to 16 on overnight trips lasting six days. Douglas’ goal is to ensure that every fifth-grader on the island gets to go on a week cruise. The kids embrace the work, he says.

Ian Ridgeway was one such 11-year-old in 1995. Today, he is executive director of the Foundation for Underway Experiential Learning (FUEL), for which Douglas serves as a chief advisor. “By welcoming me into his program, it opened doors for me,” Ridgeway says. “I loved Bob and his schooners so much that I worked for him for around 25 years. Now, I’ve dedicated my life to offering programs aboard sailing ships to help young people.”

Ridgeway is currently raising moeny to build a more modern, ocean-capable successor to Shenandoah that Douglas himself designed soon after his coastwise schooner was launched. The new ship can provide year-round programming focused on personal development for young adults 18 and over with 14-week ocean voyages. “Research has show that this can be extremely effective for developing self-determination, leadership, problem-solving and a host of positive behaviors,” Ridgeway says.

He calls it his life mission, and says it began with his one-week cruise aboard Shenandoah. “The schooner opened my eyes to what is possible in this world,” he says. “I was totally enamored by the experience.”

For Douglas, hosting kids started as a business opportunity when ridership dipped among adults. But that soon changed. “The standard response I get from kids is it’s the best week they’ve ever had,” he says. “Talk about a win-win situation; the kids are intensely interested; they’re willing to work and they never get bored. That wasn’t always the case with adults.”

As Douglas closes in on 90, the obvious question has been asked: How long will he continue to captain Shenandoah? When the subject of retirement is posed, he will only say, “We’re working on that now.”

He developed macular degeneration, an eye disease caused by the deterioration of the central portion of the retina, five years ago and receives injections every eight months that have helped. But he knows his time aboard Shenandoah is coming to an end. He expects to captain for the 2020 summer and then, he says, “We’ll reassess.”

What will he do after Shenandoah?

“That’s a good question,” he says. “It’s been my life for 55 years. Thinking about getting up in the morning and doing something else …. I don’t have a clue what that would be. That boat is me.”

But even when that time arrives, he’ll still be able to walk the 34 acres of his West Tisbury property, tend to his 22 horses, with his dogs following closely behind, and always be within a whiff of the ocean. That will keep him invigorated.

“I never have to be within sight of the water,” he says. “I just need to smell and hear it, and then I’m happy.”

Editor’s Note: At press time we learned Shenandoah’s 2020 sailing season is delayed due to the COVID-19 pandemic, and Douglas is taking this time to reassess.